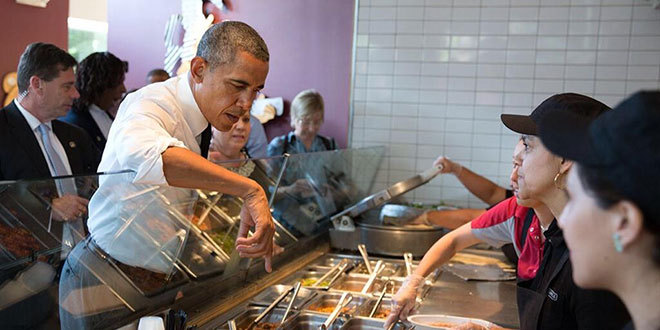 15 Hilarious Responses to Obama Reaching Over Glass at Chipotle

The last thing that Obama needs right now is another scandal. But these days, the guy seems to be collecting them rather than avoiding them.

You can call this one “SneezeGuardgate.”

On Monday afternoon, just before addressing the White House Summit on Working Families, President Obama stopped by a local Chipotle restaurant in the Woodley Park neighborhood of Washington, D.C. for a burrito bowl and a conversation with concerned moms and dads.

While standing in line and discussing burrito-customization options with several Chipotle employees, Obama committed a major breach of protocol.

As POTUS stood at the counter, he indicated which of the various food items appealed to his Presidential palate. However, Obama found it necessary to reach clear over the sneeze guard glass and point directly at the ingredients, violating several health codes and flouting societal norms in the process.

Pres Obama orders his burrito bowl at a Chipotle today before lunch w participants in the working families summit. pic.twitter.com/eVXgeYlYDe

As expected, people on Twitter did not take too kindly to President Obama infringing on the sacred zone of the sneeze guard. In fact, many users saw parallels between this action and the man’s attitude toward other established doctrine like the Constitution. One gets the feeling that there is not much that Obama finds sacred.

Here are 15 of the best tweets mocking the President for clearly overstepping the boundaries of hygiene and etiquette at a DC-area Chipotle earlier this week:

Of course Obama would do this at chipotle smh pic.twitter.com/4VKQ3rd3hb

'Sir, we're going to have to ask that you don't reach over the glass…' “@petesouza: Obama orders at Chipotle… pic.twitter.com/YIXvbQPrC5”

GET ON THE OTHER SIDE OF THAT SNEEZE GUARD YOU MONSTER! YOU AREN'T ABOVE THE LAW pic.twitter.com/o014OwO9fH

@petesouza Clearly the sneeze guard wasn't showing enough leadership. So he had to go around it.

I think we can all agree that Obama reaching over the glass at Chipotle is grounds for impeachment, if not exile

Obama: "Lemme get some of that, uh, pinko de gayo, there." Chipotle Employee: "I voted for the gringo." pic.twitter.com/LRDXulu63e

Breaking: Obama comes out for open borders at Chipotle.