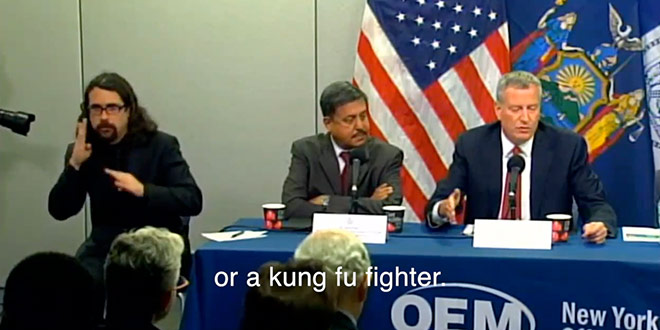 What the Ebola Sign Language Interpreter Was REALLY Saying

On Friday, New York City Mayor Bill de Blasio held a press conference to give updates on the first Ebola case to hit the Big Apple. However, while the Mayor was delivering his remarks, a man to his right was quietly upstaging him.

The man was the event’s sign language interpreter, who apparently really got into his job, so much so that his wild and frenetic hand gestures completely stole the show. In fact, video of the signer’s antics ended up going viral, much like Ebola has done.

You can watch footage of the press conference and its breakout star here.

What people are not really focusing on is what the sign language interpreter was actually signing that day. Was he truly translating de Blasio’s message word for word, or was he signing something completely different?

To help solve this mystery, we assembled a crack team of signers to decode what the interpreter actually communicated, and we present it for you now.

Here is what the Ebola sign language interpreter was really saying at that press conference on Friday: