Second Inauguration: Obama Vows to “Finish What We Started” 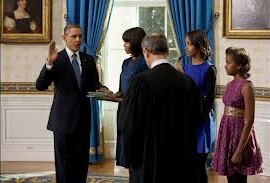 On Sunday, in a private ceremony at the White House, Barack Obama was sworn in as President of the United States for the second time, officially ushering in his next term. Yesterday, Obama publicly took the oath of office on the steps of the Capitol, gave his second inaugural address, then sent a message to supporters vowing to “Finish what we started.” As we close one chapter of American history and open another, we should reflect on Obama’s first term as President and take note of exactly what was started on those steps four years ago to get an idea of where we are headed as a nation.

President Obama promised to bring about change during his administration. Based solely on this criterion, it is not difficult to see that Obama’s first term in office delivered a staggering amount of change to the American social, political, and economic landscape. If past is prologue, then Obama’s second term promises to be equally as transformational.

One wonders what Obama’s third term will be like…