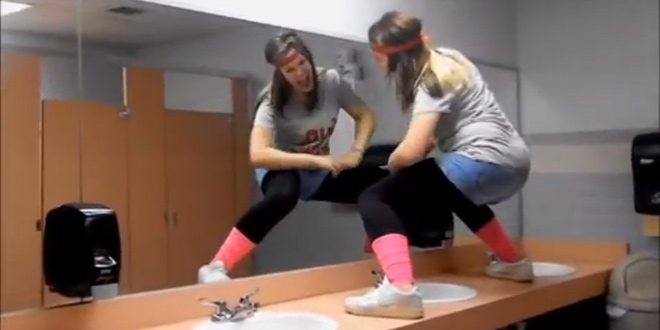 If the White House had a crazy, perverted uncle who took control of the WhiteHouse.gov website for a day, this is what you’d get:

You’d get an animated GIF of a girl twerking on a bathroom sink, slipping, and falling onto the floor.

Yes, America, this is your tax dollars at work. Or, at twerk, I should say.

You might be asking, “What does this have to do with health care?” I’d ask the same thing of Obamacare.

Well, the idea is that this young twerker, as well-intentioned as she might be, is not invincible. She needs to “Get Covered Now,” which is the point of the latest Obamacare marketing campaign. You see, the Obama administration is working hard to appear relevant to young people, and they have assembled a number of “viral” images to try to win them over.

Some may say that they’re trying too hard.

You be the judge. Here are some of the other images which are featured on the White House’s “ACA Bracket” page:

Seriously, this is an official Obamacare website, with a pimp-cat in space, dogs running into bushes, and a cat tripping on acid.

I’d like to say that it all makes sense when you go to the website and see the “March Madness brackets” and the “Sweet 16 reasons to get covered,” but it doesn’t. It’s just bad. Very, very bad.

This is what you get when you pass a bill to see what’s in it: you get twerking fails and cat GIF’s.

And the death panels haven’t even kicked in yet.

After seeing www.whitehouse.gov/acabracket, I kind of wish they had.