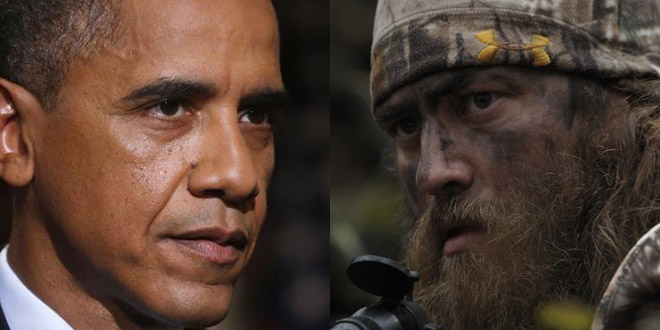 Willie, if you could hunt with any politician – like, spend a morning duck hunting, get up early – you have one politician, it has to be a Democrat, who would it be?

I’d like to talk and debate and find out what’s going on in his brain a little more… I don’t shy away from people that I disagree with. I want to know why they think what they do, and see if you can move to maybe change their thinking in some ways.

I’d like to get him out there with some camouflage and a gun, and we could sit out there and talk, and it’s a fun time.

What I wouldn’t give to see Willie Robertson and President Obama sharing a duck blind together and talking politics, with each one trying to change the other’s thinking.

Willie would tell the President that, despite high taxes and restrictive government regulations, he and his family made it in America and are living the American dream.

Obama would tell Willie, “You didn’t build that, other people made that happen,” and that he needs to take his hard-earned money and “spread the wealth around,” ending with a lecture on the virtues of Marxism.

At some point, someone would reach for a shotgun, whether or not there were ducks overhead, and the trip would probably be over at that point.

Actually, on second thought, it’s best that these two don’t go hunting together. No good could possibly come from it.