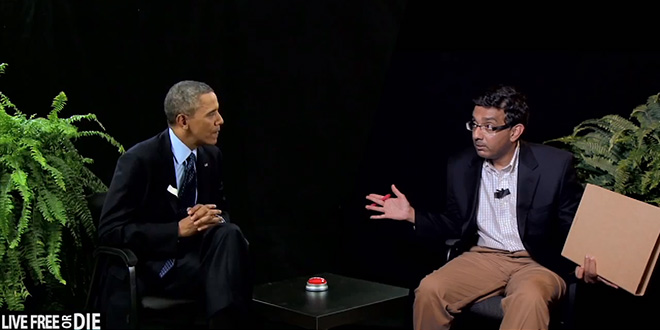 Two weeks ago, President Obama and Zach Galifianakis sat “Between Two Ferns” and pitched Obamacare in the latest episode of the popular Funny or Die web series.

Actually, D’Souza, the filmmaker behind the documentary 2016: Obama’s America, took portions of the “Between Two Ferns” interview containing President Obama and spliced them together with clips of D’Souza himself shot on a similar-looking set, creating a completely new interview purely through editing.

The result is a hilarious spoof by D’Souza of the President and his policies, mocking some of the less ideal moments from Obama’s Presidency like Lois Lerner and the IRS scandal, and the botched rollout of the Obamacare website.

All of this was a clever set-up for a trailer of the filmmaker’s latest documentary, America, due in theaters on July 4th, 2014.

The D’Souza / Obama interview is very funny and is definitely worth watching. Check out Dinesh D’Souza and President Obama as they awkwardly sit “Between Two Americas.”