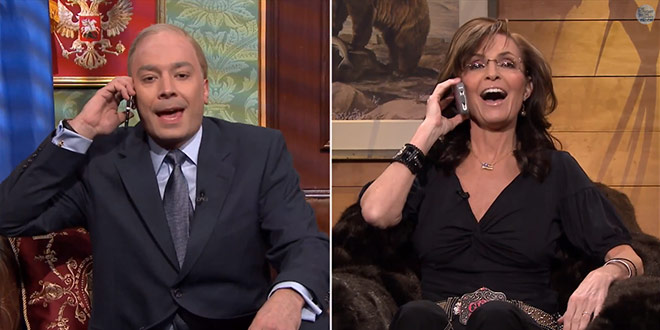 In a previous version of the skit in March, Jimmy Fallon channeled his inner Putin and placed a call to President Obama, played by comedian Dion Flynn, to discuss the tense situation in Ukraine in a hilarious parody of a real call between the two leaders.

In last night’s sketch, which picks up where the previous episode left off, Jimmy Fallon’s Putin hangs up with Obama and places a call to someone with a little more foreign policy smarts, someone who in 2008 predicted that Russia would invade Ukraine:

The duo of Putin and Palin proceed to humorously mock a number of things: President Obama and his mom jeans, Palin’s preference for unconventional children’s names, and NSA spying.

Putin and Palin even perform a little duet together, a rendition of Pharrell Williams’ “Happy” from the Despicable Me 2 soundtrack, with Putin playing the traditional Russian balalaika and Palin piping in on the flute.

All of this was to promote “Mama Grizzly’s” new show on the Sportsman Channel called Amazing America with Sarah Palin, which debuts tonight at 8pm.

Check out the funny sketch with Jimmy Fallon and Sarah Palin here: