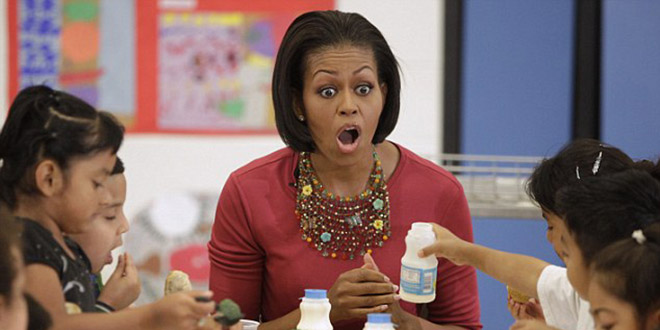 Students across America are finding themselves “hunger-free” just like their parents are finding Obamacare “affordable.”

Four years ago, First Lady Michelle Obama helped usher in a new, helpful-sounding piece of legislation called the “Healthy, Hunger-Free Kids Act,” which does not sound remotely Orwellian. Fast-forward to today, and American school kids are starting to find out how “healthy” their lunches really are.

Similar to what Obamacare has done to the health care industry, the “Healthy, Hunger-Free Kids Act” has done to student meal programs by setting new “standards” which most school cafeterias cannot possibly meet.

Under Michelle Obama’s school lunch overhaul, there is now a calorie cap placed on cafeteria meals: 650 calories for elementary schools, 700 for middle schools, and 850 for high schools. Additionally, there is less meat and cheese provided to students per meal, and more fruits and vegetables.

So what kinds of results is this program having? Predictable results: students are not eating their school meals.

If the idea behind the “Healthy, Hunger-Free Kids Act” was to make kids “healthy” and “hunger-free,” then the program has had the exact opposite effect. Another great government program at work.

The best part is that student dissatisfaction with school lunches has come to a head. Over the last month, students have been snapping photos of their rather unappetizing-looking meals and posting them on Twitter, in many cases including Michelle Obama’s Twitter handle (@MichelleObama) in their tweets for direct feedback.

Here are a few example tweets (warning, strong language ahead):

You call this a fucking “lunch”? @BarackObama @MichelleObama pic.twitter.com/jsKW70A1xw

@MichelleObama so this is the “healthy school lunch”… pic.twitter.com/qgxL5ez9zh

All we get for lunch today. Thank you Michelle Obama pic.twitter.com/1rACNXM9aP

@MichelleObama my school lunch while eating with my daughter. Only other choice was a scoop of salad. This is sad! pic.twitter.com/5iPvg2nsAa

lunch use to be my favorite subject in school. thanks Michelle Obama for ruining my life. — Hannah-Mae Campbell (@h_mae15) March 31, 2014