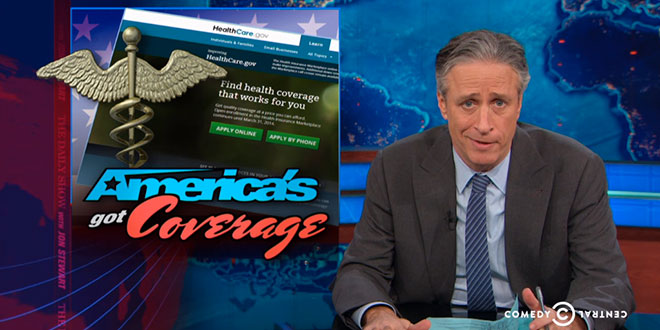 Jon Stewart is Not Buying the Obamacare Enrollment Numbers

When President Obama made his April 1st announcement from the Rose Garden stating that 7.1 million Americans had signed up for health insurance under Obamacare, something didn’t add up. Like any of the math.

By a more realistic estimate, the actual number of Obamacare enrollees is closer to 3.9 million, out of which only 1.4 million were previously uninsured. This is a pitifully low number considering that uninsured Americans were the ones who Obamacare was supposed to help the most.

Of the 3.9 million real enrollees, only 858,000 people have actually paid their premiums.

To recap, there are 7.1 million enrollees as quoted by the President (on an HHS target of 7 million) vs. 858,000 who have actually paid for health care.

On The Daily Show today, Jon Stewart indicated that he too did not believe these numbers. He mocked President Obama’s 7.1 million enrollment estimate, feigning surprise that he got it right almost to the penny.

This figure is about as believable as the Census Bureau’s fake unemployment numbers released right before the 2012 election.

Stewart also poked fun at Obama’s bizarre claim that his administration “didn’t make a hard sell” to the American people on Obamacare. At this statement, Jon Stewart seemed incredulous. He brought up the fact that the President actively pitched Obamacare on Ellen, Rachel Ray, The Tonight Show, and that he even sat Between Two Ferns with Zach Galifianakis.

All in all, it was great mockery of President Obama and his health care plan by Jon Stewart. Check out the funny clip from The Daily Show here: