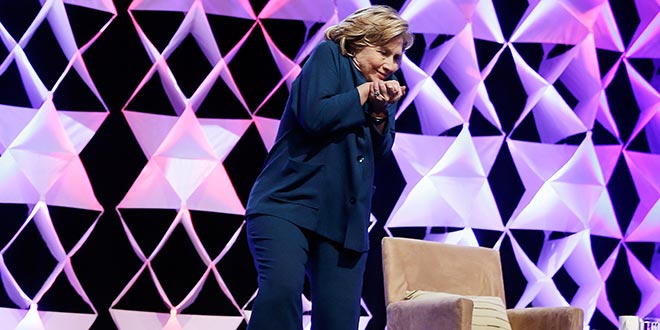 Former Secretary of State Hillary Clinton has dodged many things in her lifetime: fake sniper fire in Bosnia, staying home and baking cookies, and any accountability for the Benghazi attacks. After all, what difference does it make? Today, she can add something else to that list: a shoe.

While giving a speech to the Institute of Scrap Recycling Industries at the Mandalay Bay casino resort in Las Vegas, Hillary Clinton received quite a startle when a female protester walked down the aisle of the auditorium and threw a shoe at her.

Fortunately for Mrs. Clinton, the woman’s aim was poor and the shoe went sailing past the former First Lady, who ducked and covered. The first few moments of the incident were a little chaotic for Clinton, as she initially thought that a bat had whizzed past her head. Once Clinton realized that something had been thrown at her by an audience member, she responded with a little humor:

Is that somebody throwing something at me? Is that part of Cirque de Soleil? My goodness, I didn’t know that solid waste management was so controversial.

The footwear flinger was a woman named Alison Michelle Ernst. It was unclear what her motive was, but she was quickly escorted out of the venue by security.

Check out the video clip of Hillary Clinton dodging a shoe thrown at her by a female protester: