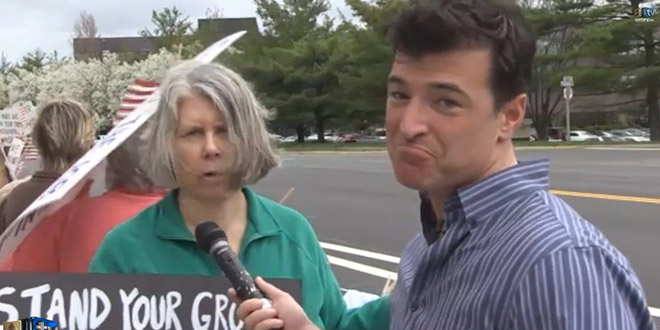 Sometimes, when you interview someone who has a differing opinion, that person can make a strong case and present an angle that you had not previously considered, all by clearly stating the facts.

This was not one of those cases.

Dan Joseph, intrepid reporter with the Media Research Center, headed to Fairfax, VA, to cover an anti-gun protest taking place at the National Rifle Association headquarters. He arrived at the scene to find protesters holding signs and peaceably marching up and down the sidewalk in front of the NRA building.

Joseph approached the crowd and made contact with several of the protesters. However, once he began interacting with them, it became clear that they were not exactly a group of five-time Jeopardy champions.

For example, there was this incredibly well-reasoned response from one of the anti-NRA protesters:

Joseph: “If I’m walking through a bad neighborhood and somebody sticks me up with a gun, then I shouldn’t be able to shoot back?”

Protester: “Well, why are you in the bad neighborhood?”

Joseph: “So, I should stay away from the bad neighborhood.”

Or, there was this absolute debate-ending argument put forth by the same protester:

Joseph: “What you’re saying [is] people should not be able to protect themselves with guns in public streets and in public areas.”

Protester: “Yes, because the only people who, in my opinion, should be allowed to carry weapons in public areas are current law enforcement and off-duty law enforcement officers.”

Here’s the video of Dan Joseph with MRCTV interviewing these near genius-level anti-NRA protesters: