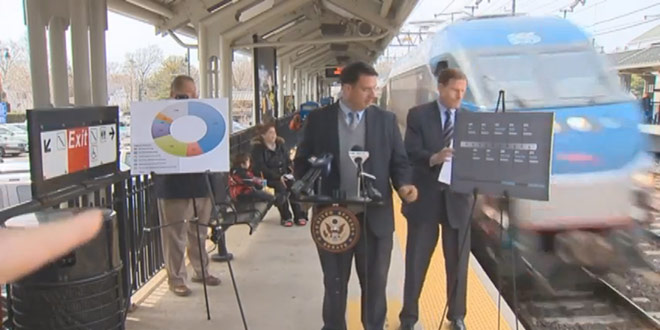 It doesn’t get more ironic than this.

At a press conference on commuter train safety in Milford, CT, on Friday, Democratic Senator Richard Blumenthal stood on a train platform next to Milford Mayor Ben Blake, who addressed the media from behind a small podium.

There was only one problem: Sen. Blumenthal was violating a key rule of train safety—he was standing over the platform’s yellow warning line.

As the Mayor spoke, a train rapidly approached both men from behind. Just before the train sped by, Blake uttered the following words:

Safety, as you know, is paramount.

Suddenly, the train flew past the platform, nearly hitting Senator Blumenthal in the shoulder and striking him down.

Once again, it’s a case of a politician living by the “Do as I say, not as I do” code. Here’s the video: