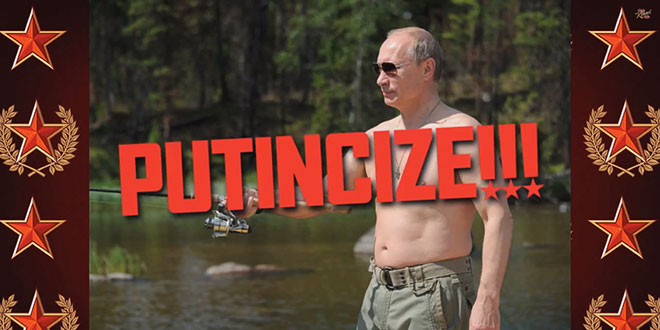 Boy, the Obama “workout video” sure is making the rounds.

As previously reported, President Obama was videotaped this past week “exercising” in a Marriott hotel gym in Warsaw, Poland, while on a diplomatic trip visiting with Eastern European leaders.

In the video, Obama can be seen straining to lift tiny weights over his head. The video was leaked, and now everyone knows that the President is not a strong leader in any sense of the word.

On Friday’s Jimmy Kimmel Live!, comedian and host Kimmel contrasted the image of a weak Obama working out with pygmy dumbbells with that of Russian President Vladimir Putin doing real, manly forms of exercise in a comedy video called “Putincize!”

In the sketch, the audience gets a glimpse of the Russian President “Putincizing”—lifting heavy weights, doing Judo throws, and killing a tiger—while President Obama is seen Jazzercising, or whatever the hell you would call that embarrassing workout routine.