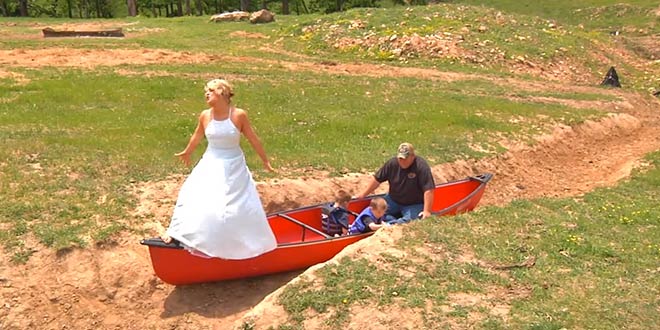 Seems like a pretty self-evident truth. Of course, leave it to the federal government to violate something that’s self-evident.

On March 25th, the EPA proposed an expansion of its powers under the Clean Water Act (CWA) to include regulatory authority over such innocuous land features as puddles, ponds, and ditches, the last of which might be dry most of the year. This type of clear federal overreach would give the EPA the power to dictate land-use decisions and farming practices in or near these ubiquitous features.

Well, farmers aren’t going to take this intrusion lying down.

The Missouri Farm Bureau has created a marketing campaign to help get the word out about what the EPA is doing. The campaign includes a music video for a song called “That’s Enough,” an anti-EPA parody of the Oscar-winning song “Let It Go” from Disney’s Frozen.

The parody video centers on the Clay family—Kacey, Andy, and their three children—and shows them fishing and boating in a creek on their land. The peculiar thing to note about the creek is that it actually contains no water. It is an example of one of the dry ditches that the EPA is attempting to regulate as a new “waterway” under the Clean Water Act.

Throughout the video, Kacey Clay sings alternate lyrics to the melody from “Let It Go,” telling the EPA that “That’s enough,” and that she and her seventh-generation farming family “don’t need more government anyway.”

The video provides a call to action at the end, directing viewers to visit a new website launched by the Farm Bureau called “Ditch The Rule” (http://ditchtherule.fb.org), where they can learn more about the EPA’s power grab and what to do about it.

One of the actions that viewers are encouraged to take is to engage on social media and tweet using the hashtag #DitchTheRule.

You can also watch an interview with the Clay family from a recent appearance on Fox and Friends: