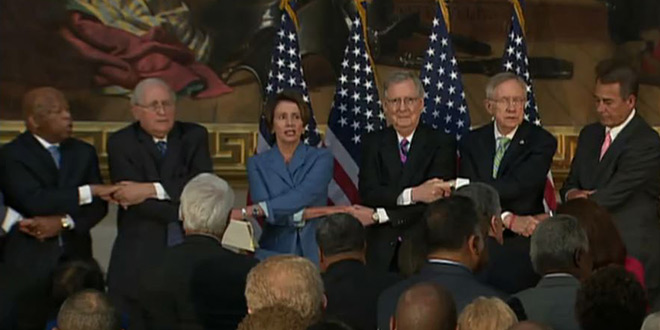 Today, the Washington Free Beacon put out a cringe-inducing video of House and Senate leaders holding hands while singing a rendition of “We Shall Overcome” in the Capitol building. This awkward event occurred during a Congressional ceremony to mark the 50th anniversary of the Civil Rights Act of 1964. You can view the original video called “Painful…GOP And Dem Leaders Hold Hands and Sing” here:

While watching the clip, I looked at our Congressional leaders lurching back and forth uncomfortably, lifting their voices flatly in song, and wondered what it would be like if these members were to sing a different song, one that truly captures the spirit of today’s Congress, and one that accurately conveys the feelings that the American people have for them.

I believe I found such a song.

Here is a new parody version of the video: