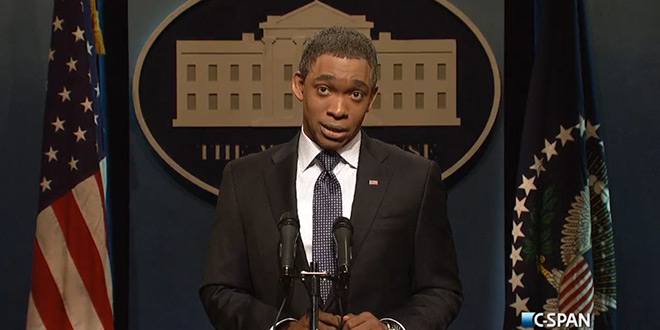 In the sketch, which was the “cold open” to the show, President Obama, played by SNL castmember Jay Pharoah, addressed reporters at a press conference. At one point during his remarks, Obama commented that his handling of the Ebola crisis, when compared to his ISIS strategy, the Secret Service mishaps, and the IRS scandal, was “probably one of my greatest accomplishments.”

Things got even more ridiculous when Obama’s Ebola Czar Ron Klain, played by castmember Taran Killam, took to the podium. While answering reporters’ questions, Klain admitted that he did not have any medical expertise in the area of deadly infections, with the exception of having been around Joe Biden and his “foot-in-mouth disease.”

Lastly, the sketch was brought to a close by the only Democrat in New York “willing to be seen with President Obama,” Rev. Al Sharpton, played by Kenan Thompson. Sharpton offered New Yorkers the following words of comfort: “If you’re worried that some parts of New York are contaminated, you’re wrong. *All* of New York is contaminated, all the time.”