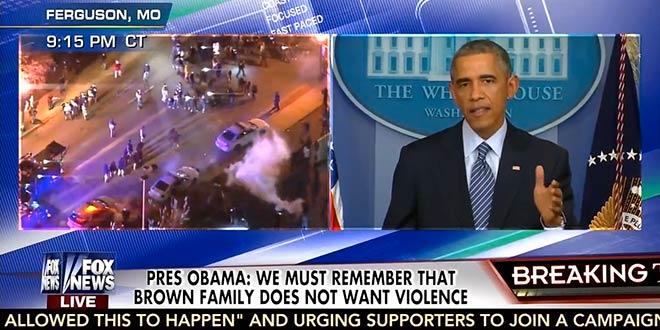 Last night, after St. Louis County prosecutors announced that the grand jury had reached a decision not to indict Officer Darren Wilson in the shooting death of 18-year-old Michael Brown, President Obama gave a statement calling for peace in Ferguson, Missouri.

The only problem was that most cable news networks ran the President’s speech in a split-screen with live footage from Ferguson showing rioters and looters clashing violently with police.

Surreal split screen: Obama calls for restraint as what looks like tear gas is deployed in #Ferguson pic.twitter.com/97W3YwGeHn

"There is inevitably going to be some reaction that makes for good tv" don't think he knows whats in the split screen pic.twitter.com/EeEByxFp7A

This is the split screen. He is speaking of peaceful protest as they flip cars. #Ferguson pic.twitter.com/Qn6YYAKHDx

As President Obama delivered his remarks, he was quoted as saying that progress “won’t be done by throwing bottles,” or “by smashing car windows,” or “by using this as an excuse to vandalize property,” all of which literally unfolded in the other half of the split-screen as he uttered these words.

The situation was very reminiscent of some of the President’s other misfires that he has been collecting over the years, like the botched troop withdrawal in Iraq, or the chastisement of Mitt Romney for calling Russia our #1 geopolitical foe, or, of course, the infamous “red line” in Syria.

In the end, the stark contrast between Obama’s failed appeal for nonviolence and the rage spilling onto the streets of Ferguson next to him only served to further emasculate an already weak President. But after six years, we should be used to this by now, right?

Here is video of the Obama split-screen moment from last night’s cable news coverage of events in Ferguson, Missouri: