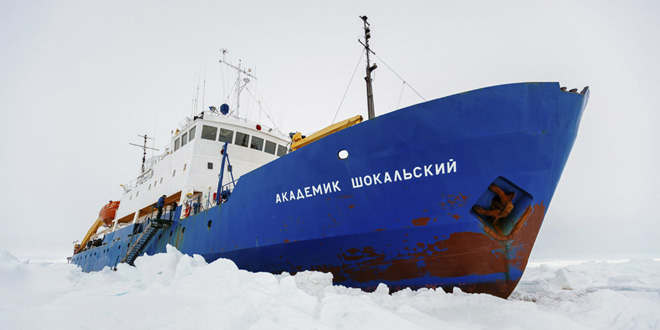 The 52 climate change scientists who boarded the Russian vessel MV Akademik Shokalskiy to study the effects of man-made “global warming” in Antarctic waters could not ignore the irony: the very ice that they claimed had melted and made polar bears homeless had suddenly materialized and rendered their ship immobile.

It is well-known that the idea of man-made “global warming” has been severely discredited over the years, if not outright disproven. In fact, mainstream press was forced to finally admit that global temperatures have been steadily cooling, not warming, since the late 1990’s. It was this disclosure which spurred these scientists to try replacing the term “global warming” with the ambiguous term “climate change,” although the damage to their reputations was done.

Also, these same “global warming” scientists finally had to reveal that the era from 950 to 1250 AD, now known as the Medieval Warm Period, saw worldwide temperature increases. This really mucked things up for “global warming” theorists because warming was supposed to have been a modern phenomenon, not something which is natural and cyclical. It’s kind of hard to blame man-made temperature increases on medieval SUV’s.

The worst blow to the “global warming” community came in 2009 when devastating e-mails released by The Telegraph showed collusion between climate change researchers who were pushing fellow scientists to “hide the decline” in worldwide temperatures. So much for science and ethics.

Oh, and there was the 2007 ruling in a UK High Court which declared that Al Gore’s “global warming” schlockumentary An Inconvenient Truth contained 9 factual errors, and that it could only be shown in UK schools if such errors were disclosed to students in advance. The truth proved to be inconvenient for the former Vice President.

The stranding of the Akademik Shokalskiy is the latest in a series of snafus for the “natural temperature cycle” deniers, the true skeptics of science.

Unsurprisingly, the mainstream press has intentionally omitted the fact that these 52 climate change scientists were on a mission to study man-made “global warming” when they got stranded in non-existent sea ice. NewsBusters reports:

Nearly 98 percent of network news reports about the stranded researchers failed to mention their mission at all. Forty out of 41 stories (97.5 percent) on the network morning and evening news shows since Dec. 25 failed to mention climate change had anything to do with the expedition.

Fortunately for the “global warming” researchers, fossil fuels came to the rescue when a gas-guzzling Chinese helicopter swooped in and flew the 52 scientists to safety.

They will live to deny another day.

Update: The Chinese vessel which had dispatched a helicopter to rescue the stranded scientists, the Xue Long, is now itself stuck in ice.

The US Coast Guard is sending its icebreaker the Polar Star to the area to assist in the rescue mission.

President Obama Gets The Latest Info On The Crisis In Egypt