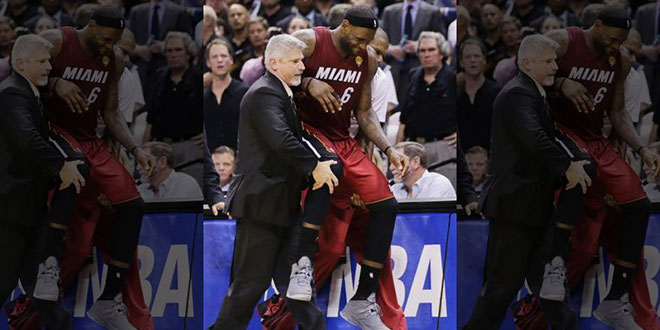 June 6, 2014 Comments Off on #Lebroning Storms Twitter After Lebron James Carried Off Court

Blame it on the heat.

During Game 1 of the NBA Finals between the Miami Heat and the San Antonio Spurs, things got a little toasty. The reason? The air conditioning in San Antonio’s AT&T Center broke down just prior to halftime, sending temperatures in the building soaring to a sweltering 90 degrees.

Now, an environmental condition like this normally would not have any material effect on gameplay, especially considering that the cities of San Antonio and Miami both have extremely warm temperatures during the summer. Fortunately for these two teams, all players were just fine.

LeBron James began experiencing painful muscle cramps in his left leg during the 4th quarter. Eventually, the cramps became so unbearable for the four-time MVP that he was forced to leave the game with 3:59 on the clock. The San Antonio Spurs would go on to win the game 110-95.

Blame it on the heat. Or, on the Heat.

What is peculiar about LeBron James leaving Game 1 early is the manner in which he left. Because of the acute pain caused by his leg cramps, James had to be carried off the court by teammates and by team personnel.

Watching this drama unfold at home, more than one TV viewer noticed how humorous and emasculating it was for LeBron James to be carried off the court like a sickly boy emperor.

Viewers got a little creative and began tweeting using the hashtag #LeBroning, posting pictures of themselves being carried off by others and wincing in pain in a perfect imitation of LeBron James on Thursday night. The meme quickly went viral.

For your viewing pleasure, here are some of the best tweets using the #LeBroning hashtag:

y'all know I had to get in on this lmao #lebroning (check my shirt tho) pic.twitter.com/WJjKHFJlTQ

Me and Lebron both cramping this morning.. Lol! Send me your best ..Lebroning… #news4sa #kabb pic.twitter.com/4JpiHlRUx8

They're #Lebroning now but they'll be crying later! Have your giggles while you can! #MiamiHeat @ToniGonzalez pic.twitter.com/Ek05gZaPe6

A/C went out at the RBC so we had to end Theory due to cramping #Lebroning pic.twitter.com/HvXVxpoXaf