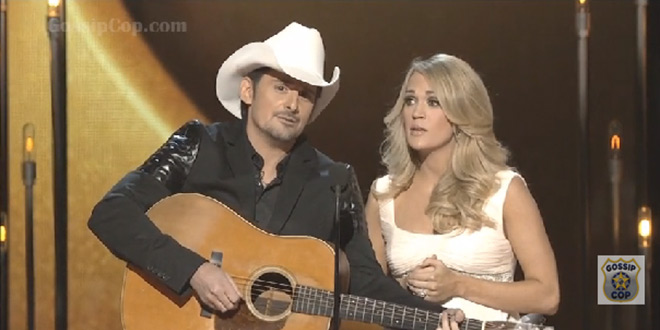 Country entertainers Brad Paisley and Carrie Underwood opened the 2014 Country Music Association Awards with a medley of jokes and quips, taking aim at everything from Obama to Ebola.

The CMA co-hosts kicked off the festivities with a tribute to George Strait, whose retirement from the music industry last year didn’t quite take. Paisley and Underwood teased Strait for not riding off into the sunset with a humorous parody of King George’s own song “The Cowboy Rides Away.”

Paisley and Underwood then poked fun at Kaci Hickox, the Ebola-treating nurse who gained national attention for returning from West Africa and refusing to remain in her Maine home following a brief quarantine in New Jersey. The dynamic duo performed a clever parody of Dolly Parton’s “Jolene” dedicated to Hickox called “Quarantine.”

The playful pair continued to crack wise and razzed pop starlet Taylor Swift for trading in her Nashville digs for the bright lights of New York City, calling the effect her move has had on Music City “Postpartum Taylor Swift Disorder,” or PPTSD.

Paisley and Underwood then snuck in a jab at President Obama, saying that he clearly does not care about “Postpartum Taylor Swift Disorder,” and that this the reason why the Democrats lost the Senate.

Lastly, the comical couple mocked the leaked celebrity nude photo scandal by playing a parody of Johnny Cash’s “I Walk The Line” called “They Leaked Online.”

All in all, Brad Paisley and Carrie Underwood’s opening act of the 48th Annual CMA Awards was very funny and is worth a watch. Check out the video here:

Wanna see Brad Paisley and Carrie Underwood sing “Obamacare By Morning” at the 2013 CMA Awards? Check it out here.