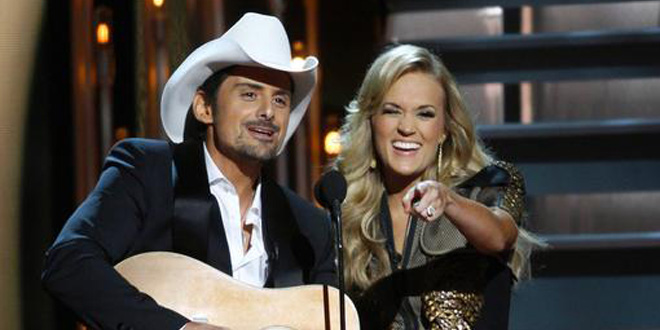 At the 47th annual CMA Awards, co-hosts Brad Paisley and Carrie Underwood hilariously mocked President Obama’s disastrous healthcare law with their duet “Obamacare By Morning,” itself a parody of the George Strait classic “Amarillo By Morning.”

With Brad Paisley strumming his acoustic guitar, he and Carrie Underwood crooned together while she opened up a laptop and frustratingly attempted to sign Brad up for unaffordable healthcare via the notoriously glitchy Healthcare.gov website.

Certain stars in the audience, like Tim McGraw and Faith Hill, seemed afraid to laugh, while Taylor Swift looked completely confused. It’s okay, Taylor, you can stay on Mommy and Daddy’s plan until your 26th birthday, which is 14 years from now.

Like parody songs mocking Obama? Check out The 7 Best Anti-Obama Parody Songs on the Internet.