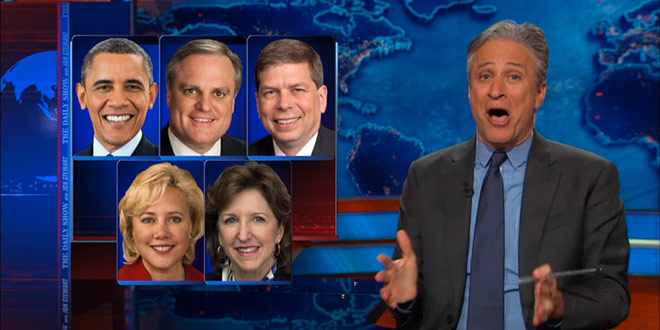 Jon Stewart Unloads on Obama and Dems, Calls Them Chickensh*t

While the Democrats climb out of the rubble caused by Tuesday’s Republican stampede and try to put the pieces of their party back together, one thing’s for certain: they didn’t see this one coming.

Now, as the Monday morning quarterbacks are assembling in the Donkeys’ locker room, many questions are starting to swirl around, questions like “What the f*** just happened?”

One person who is asking such questions is Jon Stewart, host of Comedy Central’s The Daily Show. On Thursday’s episode of the long-running satirical news program, Stewart took President Obama and the Democratic party to task over their 2014 election strategy in a blistering segment called “Obama and the Pussy’crats“.

In the piece, Stewart pilloried Obama and Democratic Senators Kay Hagan, Mark Begich, Mark Pryor, and Mary Landrieu for engaging in what he called a “chickensh*t gambit.” 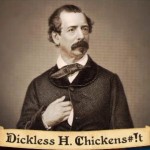 The gambit, named after “Senator Dickless H. Chickensh*t,” Stewart mused, was a calculated move made by Hagan and crew earlier this year to ask Obama to delay his decision on controversial issues like immigration reform and the Keystone Pipeline until after the election.

The idea was that the delay would allow Democratic Senators in red states to distance themselves from the President, and even criticize him for dragging his feet on these issues, somehow endearing them to key swing voters.

The only problem? The chickensh*t gambit didn’t work. All of these Senators, with the exception of Mary Landrieu, who faces a runoff election on December 6th, lost their Senate races.

These losses, when combined with the other lost Senate seats across the country by Democrats, or, “Pussy’crats,” as Stewart is now calling them, have now caused the Republicans to gain the majority in the Senate, which is not sitting well with the left. In fact, it is absolutely driving the liberal media out of its mind, leading to legendary levels of infighting, finger-pointing, and name-calling.

All of which makes for great television, like this Jon Stewart piece. So, bust out the popcorn and enjoy the show, because it’s always great to see Democrats eat their own.

Check out the humorous bit “Obama and the Pussy’crats” from Jon Stewart and team at The Daily Show: