Home > Entertainment > The Colbert Report: The Republicans Win Everything 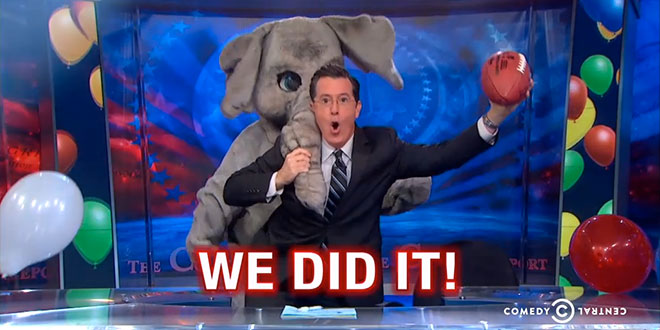 The Colbert Report: The Republicans Win Everything

This past week, I noted how enjoyable it has been to see the left-wing media forced to eat its own in the aftermath of the Republican clean sweep in Tuesday’s midterm elections. Case in point, liberal pundit Jon Stewart surgically and humorously took apart the Democratic party’s 2014 election strategy in a piece from The Daily Show called “Obama and the Pussy’crats.”

Similarly, Comedy Central’s faux-conservative host Stephen Colbert did a post-election segment on The Colbert Report in which he attempted to celebrate the Republican victory humbly and graciously, but ended up going overboard with a dancing elephant and a balloon drop. Somehow, this is supposed to mock conservatives, but it is still great to see the football spiked (literally) on behalf of the GOP.

Check out the segment “The Republicans Win Everything” from The Colbert Report: