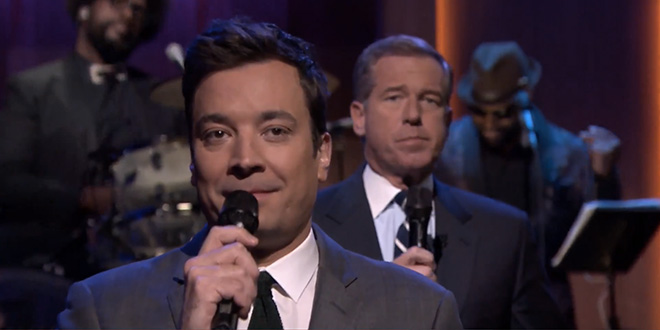 Awwww, yeah… It’s time once again to turn the lights down low, pour a glass of Courvoisier, and slow jam the news.

On yesterday’s installment of The Tonight Show, host Jimmy Fallon brought back the fan-favorite sketch “Slow Jam the News” and helped sex up a very important topic: immigration reform.

If you are not familiar with the sketch, it involves a musical performance by Fallon and The Tonight Show house band The Roots where they combine silky-smooth vocal melodies with soulful, spoken word verses over a slowed down, mellow, R&B groove that is just right for makin’ babies. The sketch covers a particular news topic of the day and peppers it with not-so-subtle sexual innuendos and quips.

Typically, Fallon and team are joined by a special guest to help them lay down that soulful vibe. This time, they were joined by veteran NBC Nightly News anchor Brian Williams, who just oozes soul and rhythm.

Together, Jimmy Fallon, Brian Williams (or “Breezy Wheezy,” “Big Brilly Style,” or “Bri-Wills to Pay the Bills,” as Fallon called him), and The Roots crooned about President Obama’s recent executive action on immigration reform, saying he took a “hard” stance and that he wants to let everyone “inside” the country, although not through the “back door.” You get the idea.