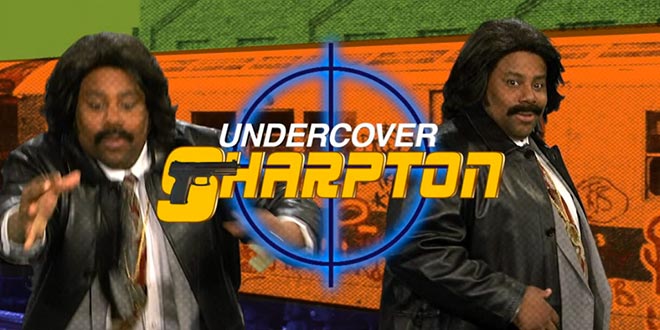 Last week, The Smoking Gun broke the story that Al Sharpton served as an FBI informant in the 80’s and helped bring down several key mafia figures. Although that rumor had been swirling for years, actually picturing a fat Al Sharpton from the 80’s doing law enforcement work is not easy to do.

For example, imagining the reverend going undercover, wearing a wire, using a codename, and busting mob bosses sounds a little ridiculous. Thankfully, the people at Saturday Night Live think so as well.

On last night’s episode of SNL, Kenan Thompson starred in a sketch called “Undercover Sharpton,” which depicted the minister in his days as an FBI rat, 30 years younger and a hundred pounds fatter.

In the sketch, “Undercover Sharpton” is part of a sting operation set-up to take down two mob guys (one played by SNL host Seth Rogen) during a staged drug deal.

As it might have really happened, Reverend Al bumbles and fumbles his way through the operation, and ends up stealing a plate of ribs from the mobsters after the bust.