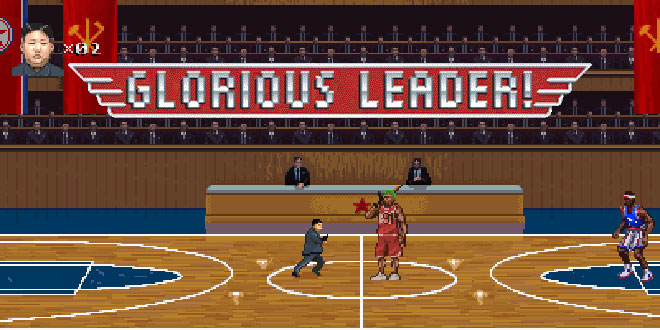 Just the other day, I was thinking: why can’t there be a video game that lets you play as a chubby, despotic dictator of a Third World Communist country?

Well, now there is. Meet “Glorious Leader!” the new game from developer Moneyhorse Games that lets you play as an 8-bit version of North Korean leader Kim Jong-un.

In a throwback to the side-scrolling, “run ‘n’ gun” shooters of the Nintendo era, “Glorious Leader!” is set in picturesque Pyongyang and features the portly protagonist defending his beloved Democratic People’s Republic of Korea from a US invasion.

The game depicts Kim Jong-un in a number of extremely heroic and completely realistic settings, like:

The retro video game also has two-player mode and allows a second person to play alongside Kim Jong-un as the leader’s favorite American diplomat, Dennis Rodman. Together, this formidable duo can defeat the capitalist American pigs for good.

“Glorious Leader!” is set for release later this year.

No word yet on whether the Contra cheat code will work on this game, but who needs god mode when you can play as the “Guiding Star of the 21st Century?”

Check out this clip of the forthcoming video game “Glorious Leader!”: