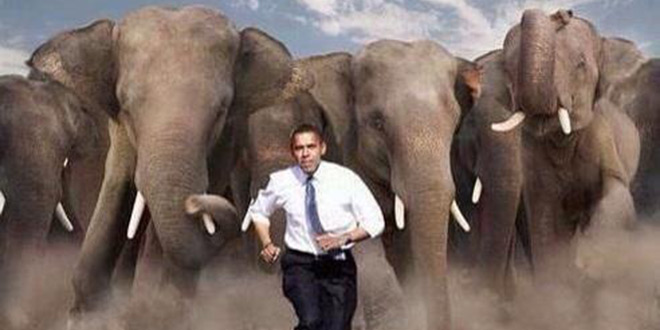 What an amazing ride Election Night 2014 was. Watching the Republicans take the majority in the Senate race by race proved to be an thrilling experience. And seeing the results of the Governors’ races pour in bit by bit was equally exhilarating.

In the House of Representatives, the results for Republicans were no less amazing: the GOP managed to further extend their majority in the House by a net gain of 12 seats, with notable wins by Mia Love over Doug Owens in Utah, Will Hurd over Pete Gallego in Texas, Rod Blum over Pat Murphy in Iowa, and Elise Stefanik over Aaron Woolf in New York.

At the state level, the story is even more incredible, with the Republicans completely sweeping the state legislatures and now controlling a two-thirds majority of state houses and state assemblies across the nation.

Sadly, this red wave rolling in on Election Night proved to be too much to bear for liberals, especially for those in the mainstream media. The good news, of course, was that the butthurt on the left ended up being a tremendous source of humor and inspiration for those on the right.

Below are the top 50 tweets from Republicans, conservatives, libertarians, and patriots alike who took to Twitter to express their sheer joy at the GOP landslide victory on Tuesday night, and who had a little fun at the expense of those on the left:

Nothing like the sound of Chris Matthews coughing, sneezing, and clearing his throat every 30 seconds.

The polls aren't even closed yet and @hardball_chris looks like an elephant crapped in his cornflakes. #Vote2014 pic.twitter.com/AxiNQxC6Be

Scene from Texas just a few minutes ago. pic.twitter.com/FOzotKgFr3

So Greg Abbott gets a chance at something @WendyDavisTexas would deny others.. A full term..

Wendy Davis lost tonight, and the other sweet victory is that her Texas Senate seat was taken by a female tea partier

Give Democrats credit. It takes a special person to fall down 5 flights of stairs and never once lose the smug look on their face.

What would CNN do if they found the plane right now?

Chris appears to be having some digestive issues. pic.twitter.com/CtT94WedQk

It's so fun watching the #MSNBC hosts trying to maintain positive spin. I'm thinking there is vodka in their coffee mugs.

A new meaning to OBAMA = Oh Boy Another Midterm Ass-whoopin!

CNN is reporting that the void is black and endless, engulfing everything around us with no foreseeable end in sight.

Chris Matthews is losing his damn mind right now and it's absolutely hilarious.

The #MSNBC gang is starting to get upset with the election results!! #tcot #RedNationRising pic.twitter.com/MQHzOil9Pi

Juan Williams says it's not a GOP wave. He's right. A wave uses 5 fingers. This is one giant middle finger.

That moment when your leg just feels like a leg. pic.twitter.com/igCM4k56S8

I just turned to @MSNBC to see their faces. Chris Matthews looks dehydrated & needed to poop.

We just turned on MSNBC and Chris Matthews is raging and yelling at Democrat Cory Booker. I think we need this. pic.twitter.com/9EN1aZZYJM

I can't remember enjoying watching MSNBC so much as right now.

Congratulations to Ernst. A former hog castrator should be able to work well with a castrated president #tcot #UniteBlue #p2

This is what a wave looks like. http://t.co/oj8q1BBpjR #Election2014 pic.twitter.com/MSxThYaH1D

Not a Wave. Not a Tidal Wave. Hey, MSM, Can you spell TSUNAMI?

Why thank you former Secretary of State, I appreciate how your endorsement worked. #hillaryslosers pic.twitter.com/U7kOzlEeBA

Is it a wave? Well, apparently even dead people in Chicago are voting GOP this year.

This is how @barackobama feels this evening pic.twitter.com/Iyud3DvR2h

Who lost the elections? pic.twitter.com/S5psyiCVcZ

BREAKING: Liberals quickly trying to brainstorm ways to blame these losses on a YouTube video.