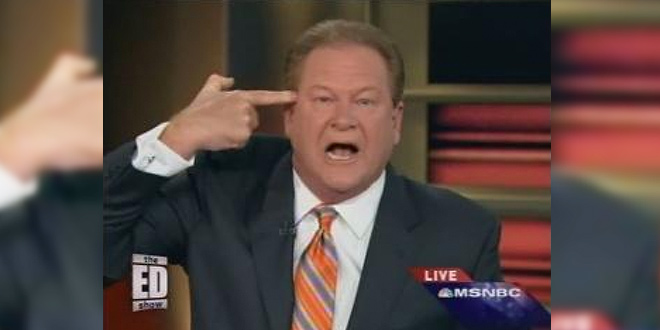 If you take a look at MSNBC’s programming lineup (and I don’t recommend that you ever do), one thing becomes instantly clear: the reason why they are dead last in the ratings.

It all comes down to the “personalities” that they have sitting behind the newsdesk. In MSNBC’s case, they have opted to fill their airtime with such industry lightweights as Ronan Farrow, the “Rev Rat” Al Sharpton, and of course, Ed Schultz.

Ah yes, Ed Schultz: broadcasting clown and maniacal host of MSNBC’s The Ed Show. Ed Schultz, whose radio career was launched by seed money from Senate Democrats weary from the daily ass-beating handed to them by Rush Limbaugh. Ed Schultz, who is not good at Twitter.

Sure, you may have heard the name Ed Schultz. But how familiar are you really with the “Ed brand?”

For example, did you know that Ed Schultz went on record claiming that the Obamacare website had no glitches? Or, did you know that Schultz once called Laura Ingraham a “right-wing slut?” If the answer to either of these questions is “no,” then good for you. But also, you’re in luck.

You see, the good folks over at MRC TV have put together an Ed Schultz “lowlight reel” of sorts showcasing the bipolar host’s absolute worst, and simultaneously his most hilarious, moments from MSNBC’s The Ed Show. And I tell ya, it’s some good eatin’.

So, sit back, relax, and take a bite out of the “Ed brand.” And then immediately spit it out, because I’m pretty sure that that’s where Ebola comes from.

21 Epic Chyron Fails You Only See on MSNBC