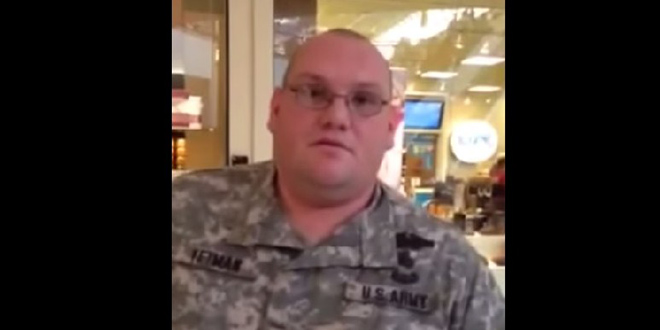 People will do anything to save a buck. But there are certain lines that you do not cross.

Like wearing a military uniform and pretending to be an Army Ranger when you’ve never served one day in the armed forces, just to get a discount. That’s what one Sean Yetman did on Black Friday at the Oxford Valley Mall in Langhorne, Pennsylvania, and he was completely called out for it.

The group Guardian of Valor, dedicated to “outing those who steal valor from those that earned it,” posted a video on YouTube on November 28th of Yetman’s on-camera dressing down, and the video has already received over a million views.

The video was taken by Ryan Berk, a former Infantryman from Easy Company, 2/506 Infantry, 101st Airborne Division, who spotted Yetman at the Philadelphia-area mall wearing camo fatigues and sporting a number of uniform inconsistencies. Sensing that Yetman was engaging in what’s known as “Stolen Valor,” or fraudulently impersonating a member of the military for financial gain, Berk decided to confront the alleged “Army Ranger.”

Berk hit the record button on his cell phone as he approached Yetman, and then proceeded to pepper the pudgy, bespectacled poser with questions about his service and about his uniform. Initially, Yetman’s story – that he was an Staff Sergeant in the Army’s 2nd Ranger Battalion of the 75th Ranger Regiment – seemed to hold up well to Berk’s line of questioning. But once Berk got into the details, the onslaught proved too much for Yetman to bear, and his story just crumbled.

The video below of fake Ranger Sean Yetman’s on-camera outing by a real Army veteran is a must-watch, and proves two things: that there are no shortcuts in life, and that impersonating a member of the armed forces for your own financial benefit makes you a complete piece of sh*t.

Check out the video here. Warning for strong language:

Next: Charles Barkley blasts Ferguson looters, calls them scumbags (with an update)