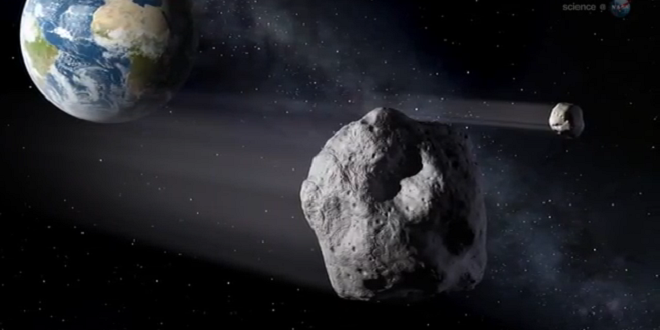 Feb. 14, 2013 – For eons, Earth has felt the tremors of asteroids striking our planet. From the extinction of the dinosaurs 65 million years ago to the felled forests around Tunguska in 1908, the space rocks keep coming.

This week, Earth strikes back. When asteroid 2012 DA14 makes a record close approach to our planet on Feb. 15th, the space rock could be the one feeling tremors.

New research by Richard Binzel, a professor of planetary science at MIT, suggests that many near-Earth asteroids experience a seismic jolt when they pass too close to our planet’s gravitational field.

“We are going to be looking closely for evidence of seismic activity on asteroid 2012 DA14 as it passes by,” says Binzel. “This is the first case of an object coming close enough to experience quakes AND where we have enough notice to plan observations.”

Binzel first began to entertain the idea of asteroid-quakes a few years ago when he was pondering a mystery about near-Earth asteroids:

“As asteroids move through space, they slowly turn dark-red.  This phenomenon, called ‘space weathering’, is caused by long exposure to cosmic rays and solar radiation. For decades, however, we have known about a handful of small asteroids that looked [light and fresh]; they were not space weathered.”

How did this group of space rocks avoid space weathering?    To solve the mystery, Binzel and colleagues calculated the asteroids’ orbits and found a telling clue: They all had very close encounters with Earth in the past million years